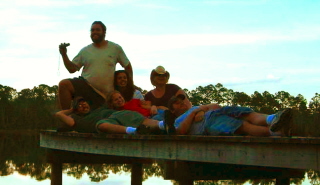 Dude this weekend we had so much fun! Judie got ZKP a GPS unit for Christmas and so they decided to try Geocaching. Learn about it! It’s cool. But I am getting ahead of myself. I’ll start at the beginning.

Thron and Laly invited Zak, Judie, Matty and me to Lakehaus for a mini-vacation. Matt and I met “Thraly” (get it? Thron and Laly? heh heh) at BK and headed north to Ocala Nat’l Forest. About an hour and a half later Lakehaus was in view and peaceful joy settled around us all. We drank some wine and decompressed.

The next morning we got up and made brunch. Yum! Zak and Judie arrived and we set up tents. ZKP got a MANSION tent for Christmas. The thing has 4 rooms plus a screened in porch! We called it the Taj Mahal. Zak made some rockin’ Dutch oven 4 pork, potatoes and carrot stew which was gone in minutes! After some cool fireworks (it was 3 Kings’ Day after all!!!!) we piled in the Taj Mahal and played the Newlywed board game. THAT was insane!!!! We all learned a lot about each other! LOL

The next day we made brunch again, stopped in to see Aunt Paula’s pile of puppies and headed to The Devil’s Hole. Zak had marked three spots near us and we were off. Devil’s Hole was a big bust!!!!! It’s private property and there were a million no tresspassing signs and two neighbors came out and watched us so we decided that was how horror movies started and we ran for the car!!!! We headed off for the next one and it was cool! Thron found our first cache in a knothole of a dead cypress tree. It was a logbook that had been there for 10 years!!!!! We decided we needed to pep it up (it was in a torn ziplock bag, water logged and sad). We got a blue travel soap dish and a new notebook. We put the old logbook in under the new one and a note saying what we had done. Lakehaus Krew was on the map! 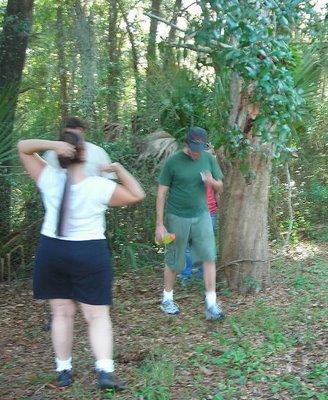 We were so excited we jumped in the Santa Fe an roared off to find our next (and final) stop. After a semi-scary encounter with a church camp we found the right lake and began to hike. We came to a thicket and began to look around. After a bit Laly said she could see a metal box. She crawled in and our second cache was unearthed!!! This one was cool, it was an ammo box from Hunnybun and Say Say and it was filled with cute treasures, a logbook and a camera! We took a photo of Lakehaus Krew, got a fortune heart and left a pocket knife. This is so much fun! 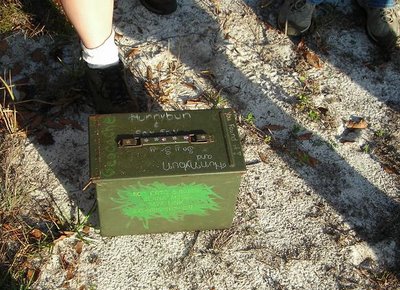 We will be doing this again and AS SOON AS WE CAN! We all agreed that scavenger hunting is great fun!

Yay Judie for getting such a cool present for Zak and THANKS to all for a great weekend!