I also got the honor of running my track almost solo.  I don’t have my Emergency Response classes so I can’t be alone when the High Risk (read: aerial artists) are onstage because if something happens, I would not know exactly what to do.  It was still pretty awesome and I felt very good about it!

(insert some icky faces at the hotel/casino for cleaning out the grease traps and sewage tanks near the end of the show.  The Wall of Stench crept into the theater and we basically ran for our cars at the end of the champagne toast!)

However… work is still going well.  I still love it.  I still think I have the best job in the world and couldn’t be happier.

Today is also the last work day before my weekend.  We are dark Wednesday and Thursday.  Can I just take a moment to rave about how awesome it is to have two days off in a row??? I didn’t know how much I missed it until it came into my life.  I honestly can’t remember the last time I had a two day weekend (on a REGULAR BASIS) in my line of work.  It was probably a fall season at Utah Shakes.  But even then, I am not sure it was on a regular basis.  It’s so nice to have both a day to relax and do nothing AND a day to get all my personal stuff done.

Hooray for growing up and getting a “real” job.  Now don’t get upset, all my Regional Theater peeps.  I’m not saying a real job… I’m saying a “real” job.  As is the majority of the population would not consider my job real any more than they consider your job real.  Ha! Seriously, have you read this note? It’s been making the rounds on Facebook.  *facepalm*

Anyway, no need for this to turn into a rant.  This is a happy space where I revel in my luck (skill??) at getting an awesome job with a fantastic company who cares deeply about their employees.

Even when I wake up in a black mood, I can still work myself out of it by talking about my work.  I’m pretty lucky because I am willing to bet there is only a small percentage of the population who can do that!

Happy Birthday Zumanity!  May you have a long and exciting life!!!!!! 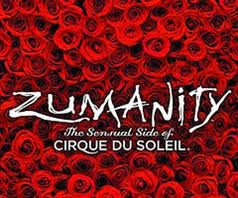